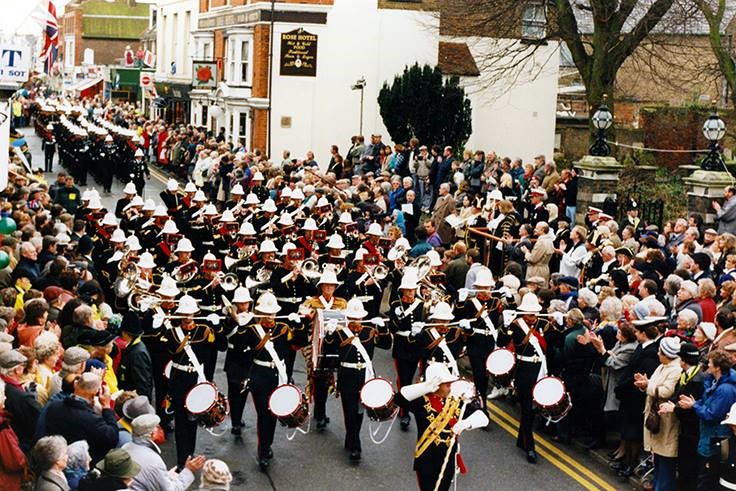 The streets around St. George’s Church and close to Deal Town Hall were crowded with people, who all wanted to hear the speeches, and also witness the Royal Marines march past and salute the Mayor of Deal, Councillor Eileen Rowbotham, and other VIP guests invited to the occasion. As part of the Royal Marines, it was remarked that there were now ten women, compared with none having been in the parade 50 years earlier. The Deal Mayor commented in her speech “It is important that we recognise and mark an event which acknowledged the courage and bravery of those times 50 years ago - courage and bravery is especially epitomised by the Royal Marines. No matter what the future holds for us and no matter what the outcome of Government defence cuts, we in Deal are proud of our long historical association with the Royal Marines. They will always have a very special place in the hearts and minds of the people of Deal.” 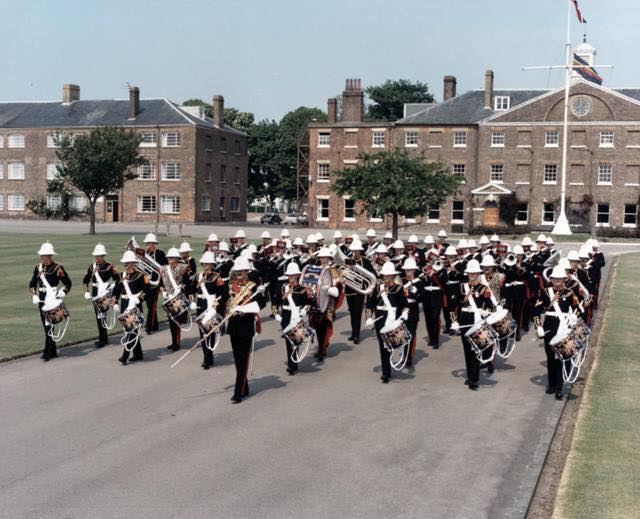 Brigadier Robert Tailyour, represented the Commandant General, who recalled some of the major moments in the association between the Royal Marines and the town of Deal. He spoke of the Royal Marines, who joined the fleet in 1588 to beat off the Spanish Armada, battles against the Dutch within sight of Deal beach, and even when Nelson had made his headquarters in Deal for the fight against Napoleon. It was also from Deal that the Royal Marines had prepared for Antwerp in 1914, and later to Deal after the campaign. Deal was also where the Royal Marines had prepared with their Fourth Battalion and trained for the Zeebrugge Raid. The Brigadier, who uncle had been the Captain of Deal Castle during the 1970s, said that he was pleased that the same friendship had continued from 1945. The adjutant at the School of Music, Captain Robert Milne, asked the Mayor of Deal their permission to march past and through the crowds of Deal. On their approach the Deal Town Hall the Royal Marines passed saluting to the Mayor and the Brigadier took the salute.

A gift was presented to the Royal Marines with a seal representing the old Deal Town crest, which was placed on a certificate to commemorate the 50th anniversary. The seal, in gold-plated metal and oak, was made by the designer Paul Harrison, especially for the occasion and the certificate was illustrated by Philippa Miller. Councillor Mrs. Eileen Rowthotham presented the certificate to Brigadier Robert Tailyour at a reception that followed the march to Deal Town Hall. In return the Brigadier presented a Royal Marines drum and said it was “an important symbol of all that goes on in Royal Marines barracks.” Replicas of the Freedom of Deal scroll were presented by the Brigadier and the Mayor of Deal to children from several of the local schools in the town.

The Royal Marines have had a long association with the town of Deal from when the Royal Marines first came to Deal. In 1665, a company of the Duke of York and Albany’s Maritime Regiment of Foot, which had been raised in 1664, were the antecedent of the Royal Marines, and were deployed to Deal during the Second Anglo-Dutch War with their main task being to protect the Deal Naval Yard. By 1793, the outbreak of war with France lead to the construction of two new barracks for the Army, which saw the construction of the North Barracks having an Army hospital and infantry units, while the Cavalry Barracks was also constructed and later became known as the South Barracks. In 1923, the amalgamation of the Royal Marine Artillery and the Royal Marines Light Infantry saw the Deal Depot taking responsibility for basic trading of all recruits in the Corps. In 1930, the Royal Naval School of Music relocated to Deal and was primarily accommodated in the East Barracks.

Did You enjoy reading that? We certainly hope so.  The History Project is a Deal based non-profit on a mission to keep the lessons we have learned from the past alive.  Can you help us? CLICK HERE!

FINALLY A HUGE THANKS TO OUR SPONSORS!