On August 1st back in 1943 the U.S Air Force carried out one of its most disastrous missions in Europe, Operation Tidal Wave. The plan was to attack nine different oil refineries in Romania. At the time, Romania’s oil production was virtually unrivalled in Europe, and Romania were an ally of Nazi Germany. The nine refineries targeted by Operation Tidal Wave provided 30% of Axis oil requirements, so a devastating strike on them would have had huge benefits for the Allied Forces. The strategic bombing mission involved a huge fleet of 178 B-24 bombers and 1,751 aircrew and was one of the largest commitments of American heavy bombers and crewmen up to that time. 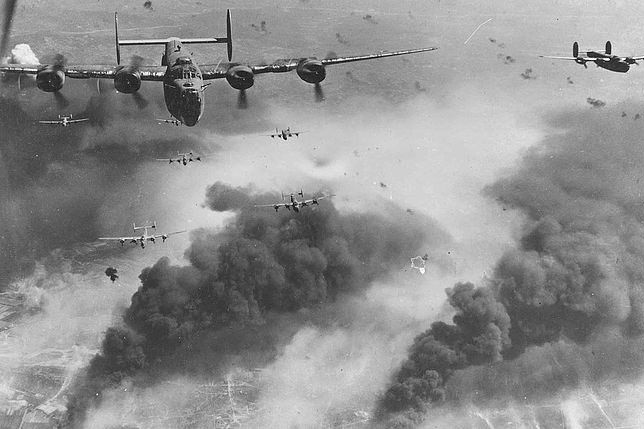 The huge fleet took off from airfields near Benghazi, Libya, and crossed the Mediterranean, Adriatic Sea and eventually entered southwestern Romania. The raid was carried out during the day and the bombers approached at low altitude to avoid detection by German radar. The mission started badly, as one bomber crashed into the Adriatic Sea on route to Romania, which created confusion as the operation was radio silent and the crash caused ten other aircrews to land at friendly air fields.

The remainder of the huge fleet pressed on and bravely carried out the mission with devastating consequences. In total 53 aircraft were destroyed and 660 aircrewmen lost their lives, because of German anti-aircraft guns and Luftwaffe attacks. Unfortunately for the Americans their costly raid had virtually no impact on oil production, and in fact after the refineries were repaired only a few weeks later they were producing more oil than before.
Do you have children in a local school? Grandchildren or nephews and nieces? Can you help us to continue inspiring them with our educational programme? A donation of the price of a cup of coffee a month will make a huge difference.  Simply CLICK HERE!