At a Deal Town Council meeting held in February 1919, a circular was read from the Rector of Deal, as Chairman of the Committee of the Deal and Walmer Victoria Hospital, asking for a new hospital as a public war memorial, with Sandwich also being invited to assist in the project. The Mayor said that he had introduced the subject of a war memorial sometime ago, but he was now more at liberty to give more information. He had attended a meeting of the Hospital Committee and it had been suggested that a public meeting be held to discuss the question of a new hospital being built in Deal, suggesting that a committee be formed to make suggestions in regard to a memorial. 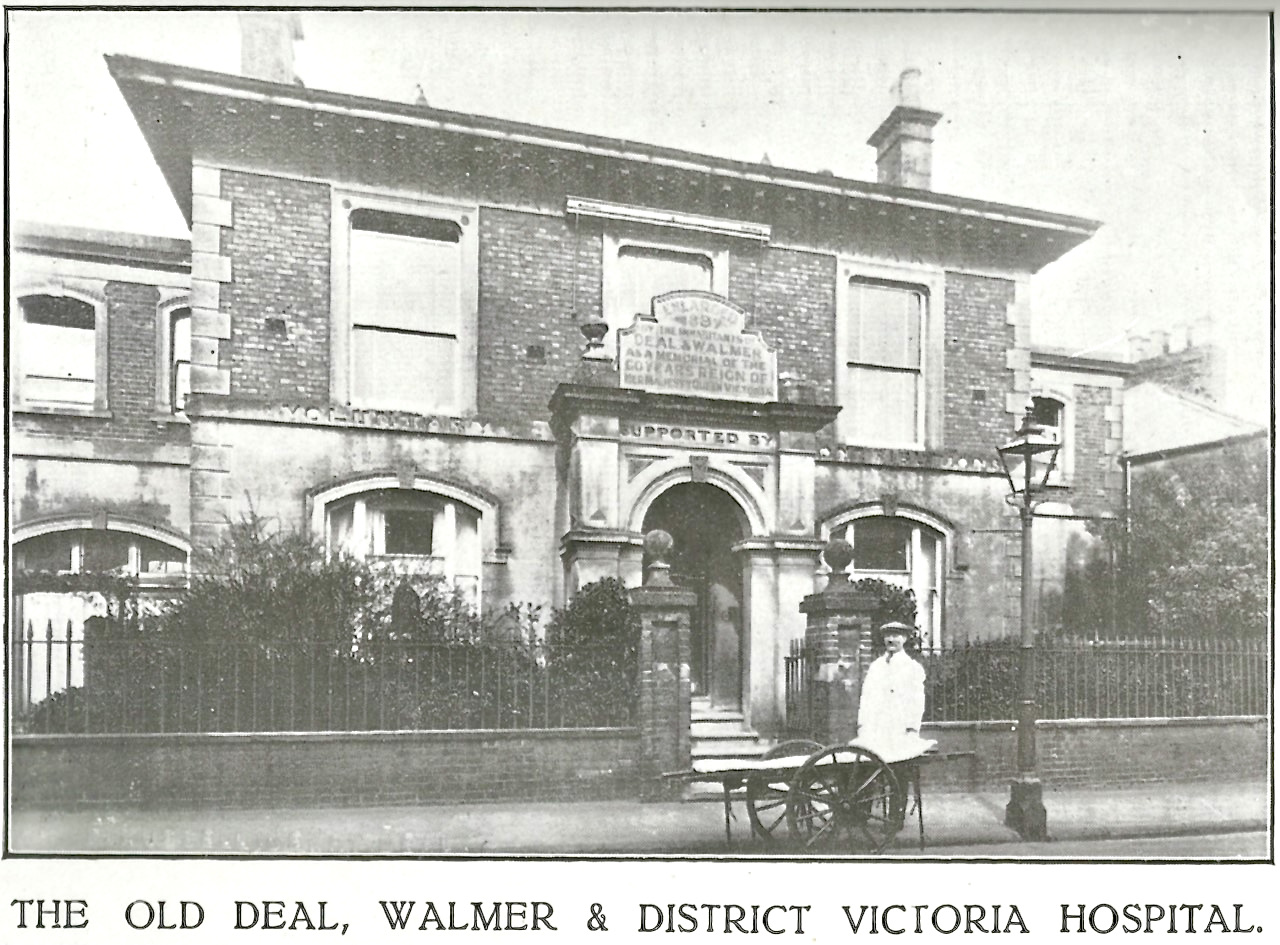 Photo - The Deal, Walmer and District Hospital that was located in Wellington Road, Deal.

On May 10, 1919, an article was printed following a special public meeting held to make the decision for a new hospital to be built as a war memorial in Deal. At the meeting Dr. F. B. Hulke said that as one of the doctors practising in the town he wanted to give his experience that a new hospital was necessary. He stated that he could remember the time when there was no hospital and there were people who argued that there was no necessity for a hospital in Deal. Hard worked had been made at the time of Queen Victoria’s Diamond Jubilee to the Victoria Hospital, which had remained overcrowded ever since. Even at the time of his speech the hospital was full with patients. The new for a new hospital was necessary as there were always people waiting to go in and they even had to discharge patients earlier than they would otherwise to make room for more urgent cases. He felt that a larger hospital was necessary even though another scheme had been proposed for an institute or a club for discharged or demobilised men from the Great War.

On July 12, 1919, the Deal, Walmer & Sandwich Mercury newspaper printed details of a public appeal for a War Memorial Hospital to be erected for Deal, Walmer and the district. Funds were being requested for a General Hospital that would be built in memory of those who had died for King and Country in the Great War between 1914-1918. The purpose of the hospital would be to the glorious memory of those who have fought and to those who have made the supreme sacrifice for the national right and liberty. The decision to go ahead with the building of a General Hospital would formally be made at public meetings. Some of the reasons that were being put forward for the need of a General Hospital in Deal included that only 12 beds were already available in the Victoria Hospital, which was situated in Wellington Road, to serve a population of nearly 20,000 people. It was stated that the nearest other hospitals were located at Dover and Canterbury. Local Medical Men were often having difficulty in obtaining treatment for urgent cases. The preservation of life and health in the future would be of far greater importance than ever before, and no more fitting memorial would be created to the men who had fallen in the Great War, or one which would greater blessings to the living than with a hospital, which would be equipped with every modern appliance, to give the most skilful treatment possible.

It was proposed that build and equip a hospital with 23 beds it would be necessary to raise £12,000. A generous sum had already been promised with a donation of £5,000 from Mrs. Mark Woode, while several smaller sums of £100 had also been promised. Payments made by subscribers into the hospital fund would be paid into the Banks in Deal and Walmer. A site in London Road on the corner of Bowling Green Lane had already been purchased, which had once been a football ground. The Honorary Treasurers of the Deal Hospital Fund were Mr. J. Manners of the National Provincial & Union Bank in Deal, and Mr. T. S. Harvey of the London, County and Westminster & Parr’s Bank at Walmer. Several Honorary Secretaries in included Councillor G. D. Roe, Mr. W. Ryder-Richardson. During September 1919, a War Memorial Week was organised in Deal and Walmer to help raise funds for the Deal Hospital Fund, which proved a success and succeeded all expectations. Over £1,900 was added to the fund during that particular alone, which had brought the total amount to £9,925. A general list of the subscribers donating money to the fund were regularly printed in the newspaper stating names and the amount of money that had been donated by each individual. 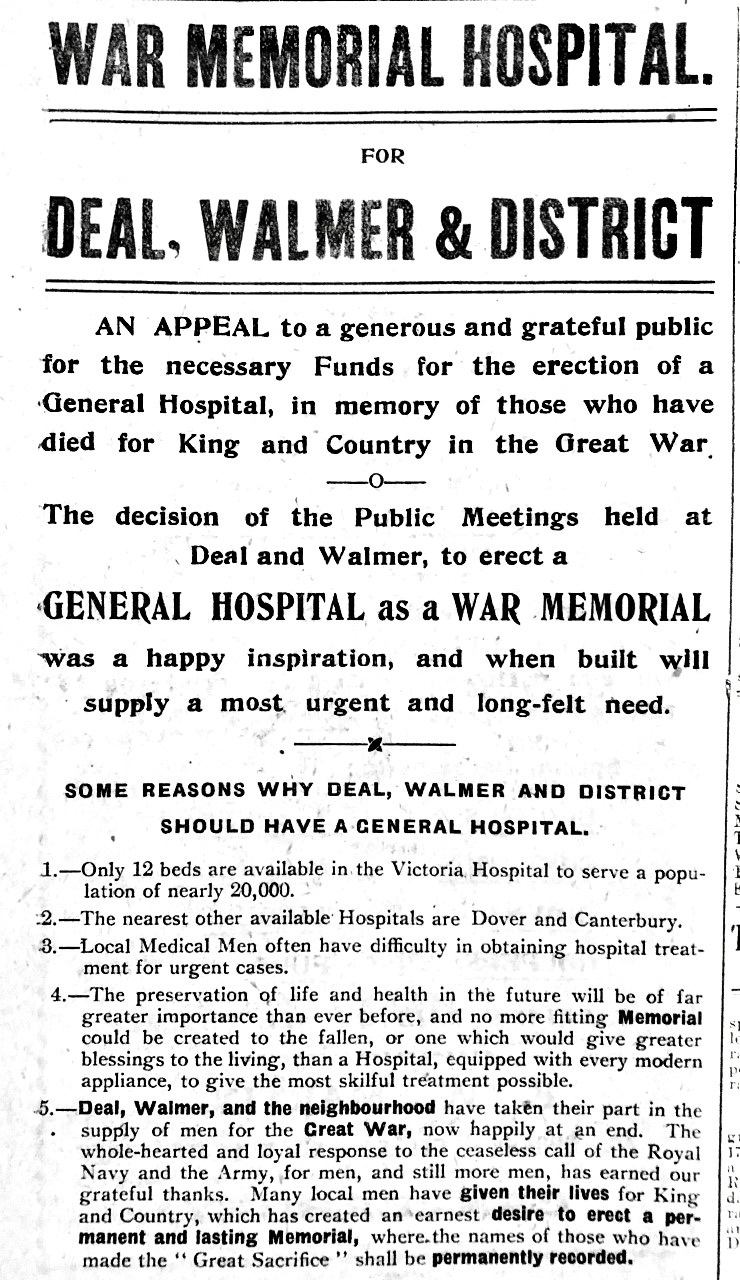 Photo - Deal, Walmer & Sandwich Mercury newspaper advertisement for a new hospital to be built in Deal after WW1 (circa. 1920)

By January 1920, subscriptions had raised £12,332 0s. 4d. with grants from the County Red Cross funds and money raised from the closing of St. Anselm’s Red Cross Hospital at Walmer. With the increased cost of building work it was decided not to commence the erection of the hospital until the funds amounted to £15,000. On 26th and 27th August 1920 a bazaar and pastoral revue held in the grounds of Walmer Castle added £1,550 to funds. Finally on March 17, 1924, the Victoria Hospital, Deal, Walmer and District War Memorial was officially opened by H.R.H. Prince Henry. At the rear of the hospital was a chapel dedicated on November 29, 1924, as a gift of the ladies of St. Leonard’s Parish with a semi-circular apse added by Mrs. Marke Wood.

Did you enjoy reading that? Would you be willing to support a great local cause? A cause which inspires thousands of children every year and keeps local history alive.  WE REALLY NEED YOUR HELP! CLICK HERE!